PM: “We are committed to the principle of peaceful settlement of the Nagorno-Karabakh conflict and are prepared to resume the peace process”

A regular meeting of the Eurasian Intergovernmental Council was held today under the chairmanship of Prime Minister Nikol Pashinyan at K. Demirchyan Sports and Concert Complex in Yerevan.

Chairman of the Board of the Eurasian Economic Commission (EAEC) Mikhail Myasnikovich, RF Premier Mikhail Mishustin, Belarus Prime Minister Roman Golovchenko, and Prime Minister of Kazakhstan Askar Mamin have arrived in Yerevan to attend the meeting. Ambassador Extraordinary and Plenipotentiary Alikbek Jekshenkulov participated on behalf of the Kyrgyz Republic.

The narrow-format session was followed by an expanded meeting of the heads of government of EAEU-member States. Prime Minister Pashinyan delivered a speech, in which he stated:

Welcome you to Armenia at this regular meeting of the Eurasian Intergovernmental Council. I am glad to see you all in our country.

I should note with regret that for well-known reasons the Prime Minister of the Kyrgyz Republic was unable to attend the Council’s meeting, and therefore today’s session is held in the format of a working meeting. I wish peace and harmony to the friendly people of Kyrgyzstan and an early settlement of the political situation in the country. 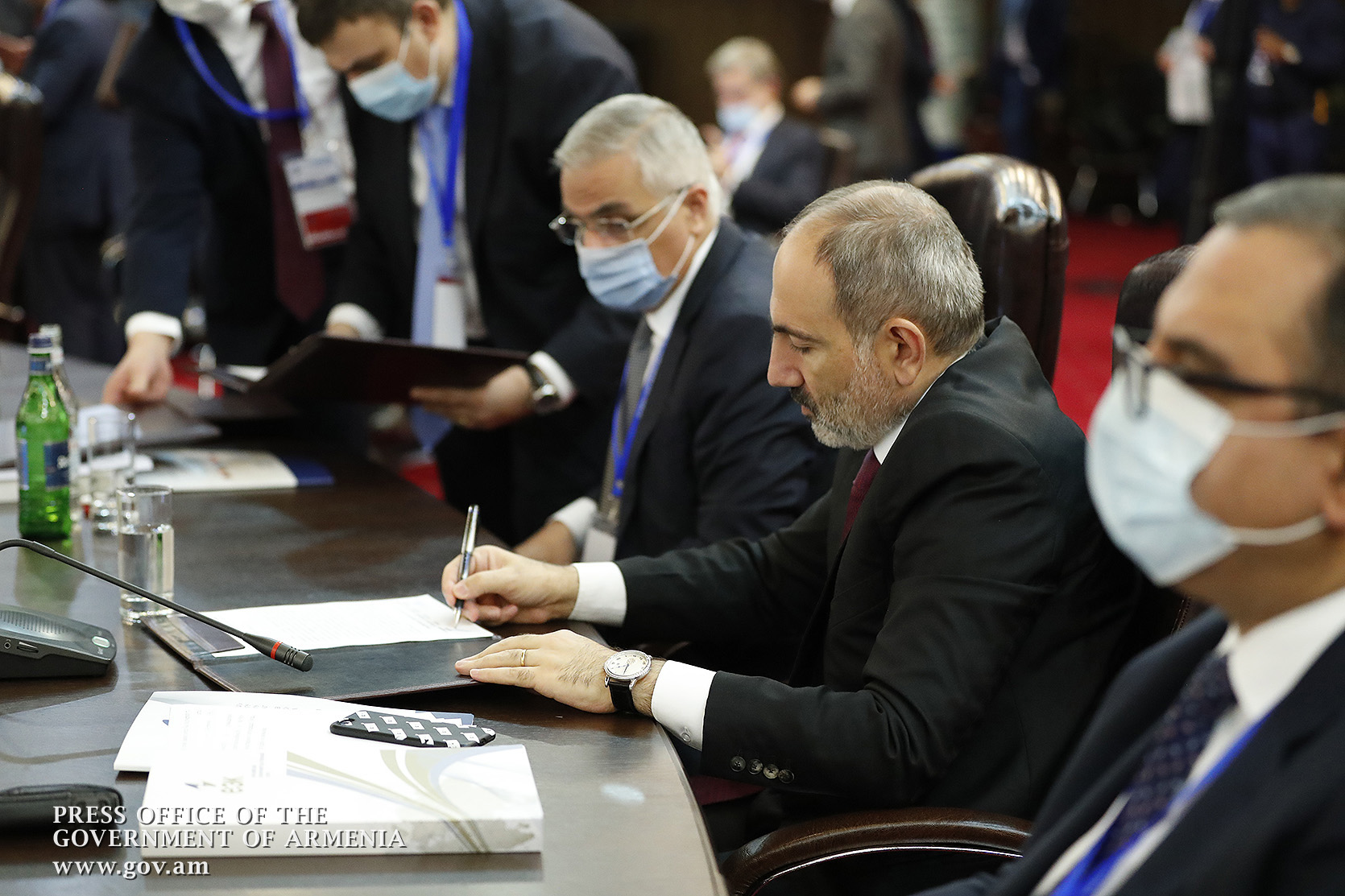 As I noted at the narrow-format meeting, our country and our people are going through difficult times. Two weeks ago, Azerbaijan launched a full-scale offensive against Nagorno-Karabakh. Supported by Turkey, Azerbaijan’s armed forces are conducting military operations using all types of modern armament. The offensive is directed not only against Nagorno-Karabakh, but also against the territory of the Republic of Armenia. We consider this as Azerbaijani-Turkish aggression against the Armenian people.

Our people are facing a serious challenge. Our cities and villages have been under constant rocket and artillery fire. The civilian population of Nagorno-Karabakh is at gunpoint. There are many killed and wounded. Civilian infrastructure was seriously damaged, residential buildings were destroyed. The capital of Nagorno-Karabakh, Stepanakert, was affected, in particular. The people of Nagorno-Karabakh are on the verge of a humanitarian disaster.

Led by Turkish military specialists, the Azerbaijani army has been joined by Turkey-backed mercenaries and militants from Syria. This fact was confirmed by the official statements of the leaders of the OSCE Minsk Group co-chairing nations, as well as by numerous media reports published in authoritative international outlets.

Turkey’s active involvement is of particular concern. It is threatening to completely destabilize the situation not only in our region, but also across the globe. Despite all efforts, our adversary failed to achieve any tangible result. Our people are more united than ever and are determined to defend their freedom and independence. 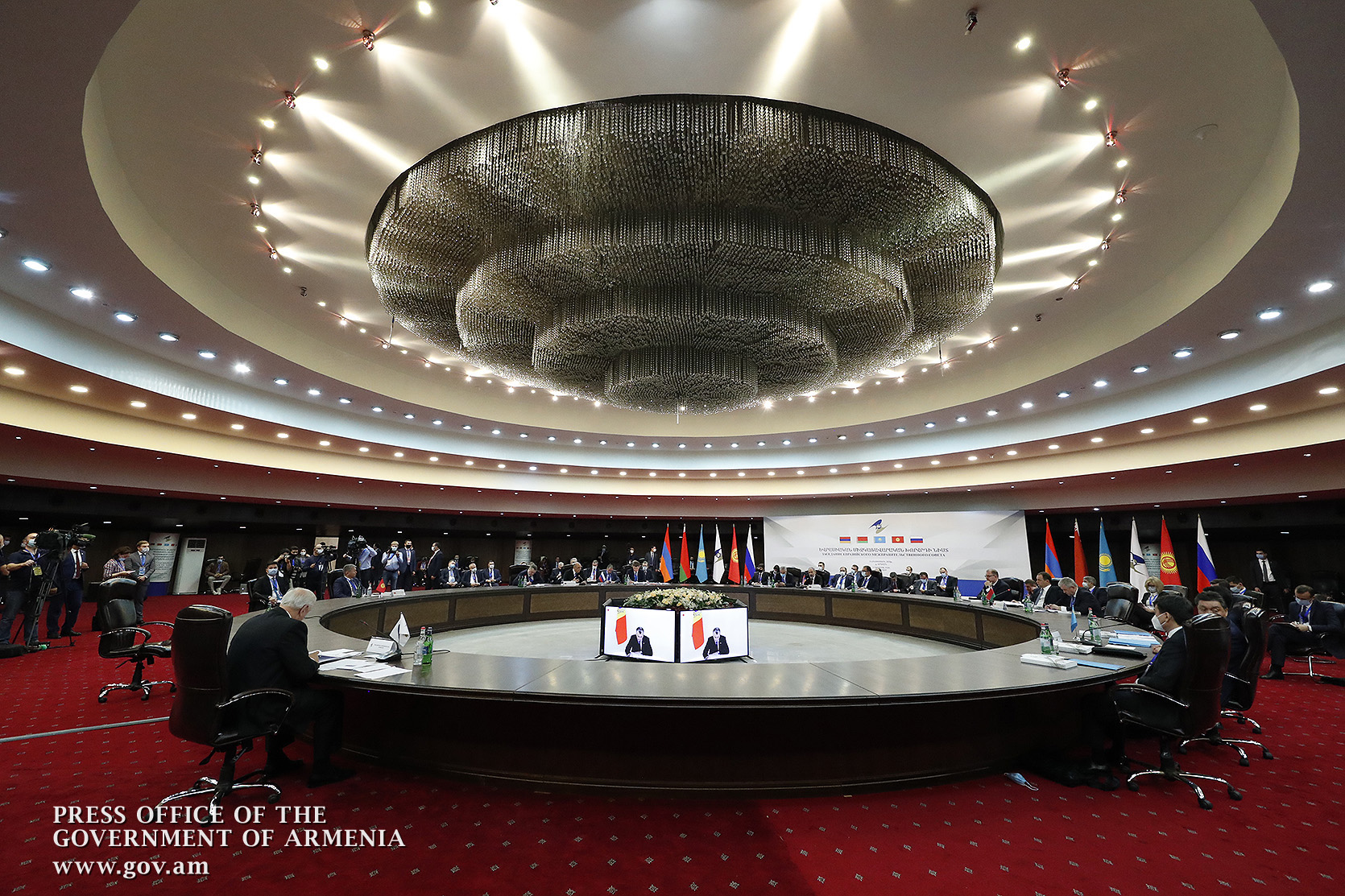 We are committed to the principle of peaceful settlement of the Nagorno-Karabakh conflict and are prepared to resume the peace process in accordance with the statements made in the past few days by the presidents and foreign ministers of the OSCE Minsk Group co-chairing countries.

You may understand that this is a matter of paramount importance for us, and I actually wanted to share with you some details of those dramatic events that are now taking place in our war-torn region.

As we have repeatedly stated, participation in the Eurasian Economic Union and the efforts to deepen integration between our nations is a key priority for our government. We will continue to make every effort to achieve the goals set by the Union as soon as possible, despite the challenges that our country is facing today.

As regards the agenda of today’s meeting, I would like to dwell on the following issues. I believe that the sanitary and epidemiological well-being of our populations amid the spread of COVID-19 is relevant for all of us. In this respect, I would like to emphasize the importance of the “Traveling without COVID-19” pilot program, developed by the Eurasian Development Bank’s Digital Initiatives Fund.

Developed jointly with Armenia and Russia, the program is a landmark stage on the way to building an effective system of movement for our citizens with minimized risks of crossing state borders in conditions of coronavirus infection.

Amid the ongoing pandemic, we emphasize the importance of finding a common solution to facilitate passenger traffic. Semi-closed borders in our space will have an adverse impact on both integration processes and the economies of our countries.

In this context, we attach great importance to the development of e-commerce, which is a key component of the digital economy. Widespread use of e-commerce can expand the marketing capabilities and the sales of our companies, as well as ensure full control over commodity turnover.

We are taking steps to attract international participants in the field of e-commerce to the Armenian market. Here, indeed, we need to first of all increase citizens’ trust in electronic transactions in order to build up a certain basis for electronic commerce. 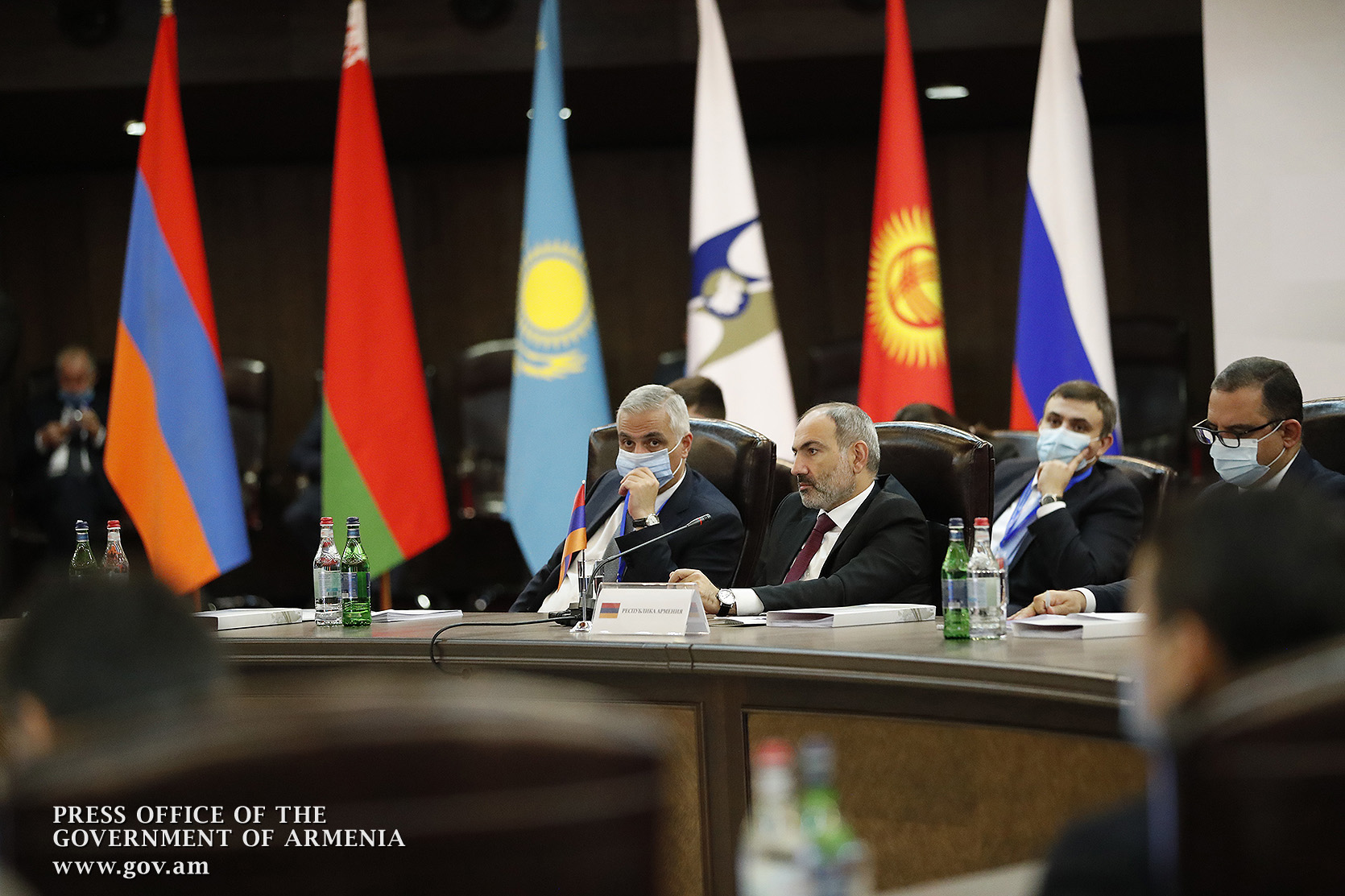 And the last point. We, as always, pay special attention to the draft document “On strategic directions for the development of Eurasian economic integration until 2025.” We are convinced that the strategic directions will help us raise the Union’s investment and innovation attractiveness, enhance competitiveness, build up research and production capacity. Thank you.”

The other heads of government of EAEU-member States made speeches during the meeting. The Prime Minister of Moldova Ion Chicu, as the head of an observer state’s government, addressed the meeting in the mode of video conference.

Taking the floor, Prime Minister of the Russian Federation Mikhail Mishustin touched upon the ongoing hostilities along the Karabakh-Azerbaijani line of contact: “I would also like to express my most sincere condolences to the families and friends of those killed and injured these days in the Nagorno-Karabakh conflict zone. We mourn together with everyone who lost their loved ones in this conflict. Of course, it is important to ensure an immediate cessation of hostilities and start a diplomatic settlement of the conflict. Russia is prepared to assist this process together with other OSCE Minsk Group co-chairs.”

A number of agenda items were discussed at the session of the Eurasian Intergovernmental Council. In particular, reference was made to the sanitary and epidemiological situation and the resumption of passenger traffic within the EAEU, as well as to steps aimed ensuring safe passenger traffic.

The meeting also discussed the Eurasian integration development strategy, progress in the efforts aimed at removing unnecessary restrictions and exceptions still available in the Union’s domestic market, the basic regulatory framework applicable to cross-border (foreign) electronic trade, and the ongoing joint activities to develop exports. A number of documents were signed at the end of the meeting.

The Council members decided to hold the next meeting of the Eurasian Intergovernmental Council this December 4 in Moscow.

Statement by the Foreign Ministry of Armenia upon the 5th anniversary of the Azerbaijani aggression against Artsakh unleashed in April, 2016

PM: “We are committed to the principle of peaceful settlement of the Nagorno-Karabakh conflict and are prepared to resume the peace process”
All Timeline »